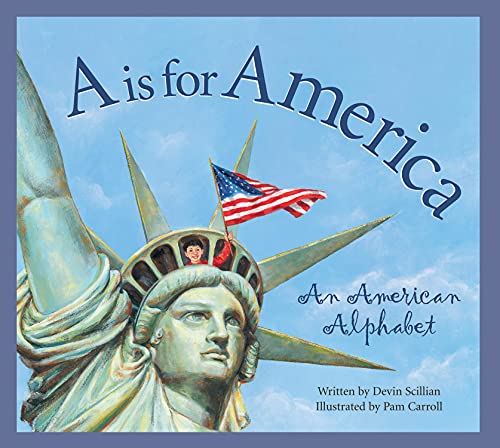 A IS FOR AMERICA: An American Alphabet

Tidbits of American history, geography and pop culture, as well as a sprinkling of commercial brand names, appear in this hodgepodge of an alphabet book. Scillian, a Detroit news anchor, delivers uninspired verse: "Kitty Hawk and Kansas, and Kodiak bears./ King Kamehameha, Kellogg's Rice Krispies squares./ is for two kinds of King—George the Third who was defeated,/ and Martin Luther Junior whom our troubled nation needed." Sidebars on each spread offer several explanatory notes, some of which are helpful ("King Kamehameha was the ruler of Hawaii more than 100 years before Hawaii became a state"), while others are murky ("Henry Ford [listed under "H"] didn't invent the automobile. But his way of building them was so successful many people believe he did"). First-time illustrator Carroll paints sometimes jarring collages of items mentioned in the text; representing the letter "P," for example, is an illustration of Rosa Parks sitting on a bus, holding a container of popcorn and gazing out the window at converging images of Philadelphia, Pike's Peak and Plymouth Rock. Ages 4-8.