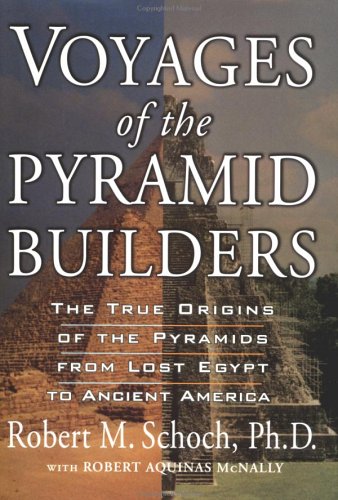 VOYAGES OF THE PYRAMID BUILDERS: The True Origins of the Pyramids from Lost Egypt to Ancient America

The great pyramids of Egypt provide a wonderful glimpse of the artistry, skill and imagination of the ancient world. But pyramids can be found in India, China, Peru, Bolivia, Mexico and Ireland. In this provocative book, geologist Schoch (noted for his work in redating the Sphinx, which was recounted in his ) wonders how so many diverse cultures built such similar structures with similar purposes. Using geological, linguistic and geographical evidence, he contends that a protocivilization of pyramid-building peoples was driven out of its homeland, the Sundaland, which geologists believe connected Southeast Asia with Indonesia, by a rise in sea level caused by comet activity between 6000 and 4000 B.C. Fleeing their homeland, these peoples took their knowledge of pyramid building with them into Sumeria, Mesopotamia, Egypt, China and Peru. Schoch hypothesizes that the pyramids were built to reach into the skies and to penetrate the mystery of the heavens, source of catastrophe. Schoch also asserts that the pyramids point to unity and symbolize the deep concerns shared by all humans. Schoch builds his engrossing case on geological details of the pyramid sites he has examined around the world. In the end, however, even he admits his evidence of a Sundaland protocivilization is speculative. As controversial as this book is bound to be, Schoch's evocation of the pyramids forcefully reminds us of their enduring power as monuments to the spirit of human creativity. 16 pages of color photos not seen by .