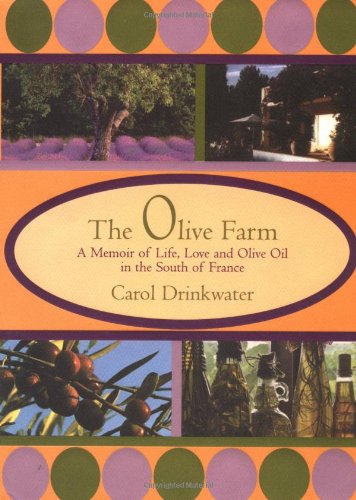 THE OLIVE FARM: A Memoir of Life, Love and Olive Oil in the South of France

Following in the footsteps of bestselling authors Peter Mayle () and Frances Mayes (), Drinkwater has written a memoir of her flight to the good life in southern France. "All my life-long, I dreamed of acquiring a shabby-chic house and renovating it," writes the author, a British actress who starred in the BBC adaptation of James Herriot's . When she and her husband, Michel, spot a hillside villa with an olive vineyard in a village near Cannes, they defy common sense and become landowners. Never mind that it is moldering and insect-infested, the roof leaks and there doesn't seem to be any running water. Drinkwater's account of paradise regained involves bushwhacking through the intricacies of French property law and battling the elements of nature (wind, rain and fire), to say nothing of the eccentric local population. Alas, the book reads, by turns, like a catalogue of the author's real-estate woes ("We have a leaking roof!") and a ponderous love poem ("We are two embarking on this path together. Newly in love. Thrilled by one another... Investing in love, in one another."). Still, for all its false notes, the book describes life in the South of France with lush, voluptuous appreciation and successfully plays into our fantasies of the Mediterranean "land of liquor and honey."