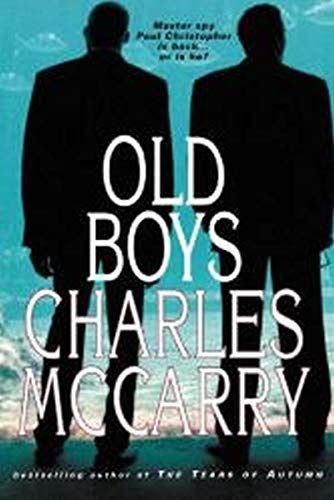 McCarry is another ace spy novelist from the past to whom Overlook's Peter Mayer is giving a new lease on life (as with Robert Littell's two years ago). Both of them are real pros, with McCarry having a more lapidary style and a rather more aristocratic turn of mind. His "old boys," former CIA men who come out of retirement to help one of their former colleagues, Horace Hubbard, find his lost cousin, Paul Christopher, are a classy group, each with a well-defined area of expertise. Christopher, an elderly agent himself (he starred in some of McCarry's earlier books, most notably in ), has disappeared, and apparently died, in a remote area of China. His ashes are sent back to the U.S. by the Chinese, and a memorial service is held. But Horace cannot believe he is dead, and nor can Paul's daughter, Zarah. As they set out on Christopher's trail, they find it leads to his remarkable mother, Lori, who was probably involved in the assassination of Nazi kingpin Heydrich in WWII and kept as a legacy of that monster a priceless scroll in his possession depicting the death of Christ from a Roman agent's viewpoint. The plot is almost indescribable, involving a Muslim terrorist who wants the scroll and who plans to blow up much of the West with a cache of miniature Soviet nuclear bombs; a Chinese forced-labor camp; and sundry ex-Nazis, ex-KGB men and double-crossers galore. It's a great tribute to McCarry's skill that he manages to keep all his colored balls in the air and carry the reader willingly with him. But the kitchen-sink approach to the plot increasingly strains credibility as the story zips along, and the tension between his all-too-believable "old boys" and the comic-book action is never satisfactorily resolved.