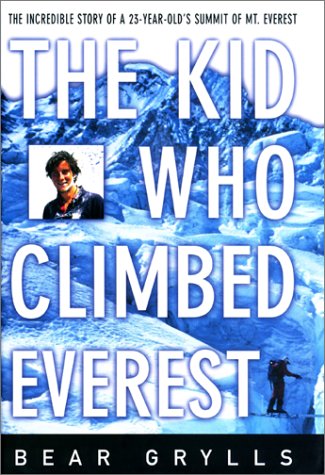 THE KID WHO CLIMBED EVEREST

For a year, Grylls held the record for the Youngest Englishman on the Hill for his summit ascent at age 23 (only to be bested the following year by a 22-year-old). Grylls, while serving in the army, suffered a parachuting accident that nearly severed his spinal cord. After eight months in a military rehab center, he decided to leave the military and climb the legendary Everest. Barely escaping death (he fell into a crevasse at 19,000 feet), he reached the summit just 18 months after his accident. Unfortunately, Grylls's account of 70 days on Everest has a flat pitch, stiff syntax and little insight to offer on the experience of reaching for the top of the world save earnest observations on grit, body functions at high altitudes, his grandpa, faith, queen and country. The transcendent folly and physical drama of climbing above 26,000 feet were sharp narrative tools in Jon Krakauer's but the Kid can't quite elaborate on how he felt as he passed the decayed, mummified body of Rob Hall, who tragically failed to scale the summit ridge. Grylls's report from the top of the world is almost without discernible color except the "bully" attitude Grylls and his mates brought along from England and took back home after a few celebratory ales in Kathmandu. His story adds little to the ever-expanding Everest genre.