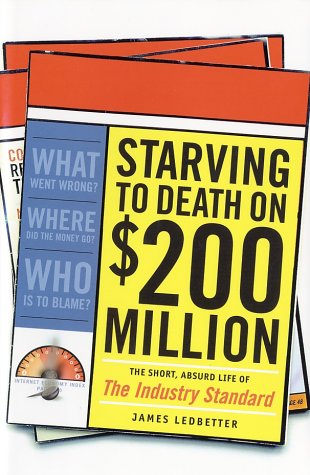 STARVING TO DEATH ON $200 MILLION A YEAR: The Short, Absurd Life of the Industry Standard

The began publishing in April 1998 and grew explosively. Judged on its second-year revenue, ad sales and influence, it was one of the most successful magazine launches ever. It took in $300 million in its first 20 months, but didn't survive the next 20 months. Ledbetter, the magazine's European bureau chief, explains how it all happened in a terrific inside account of the Internet boom. The was positioned exactly at the intersection of technology, media business and finance. It was the authoritative source for industry reporting; its stories could drive the Internet stock market; and it was a start-up new-media company with all the innovation and chaos the term implies. Ledbetter is the perfect person to tell the story: an experienced business media reporter who learned about technology and finance on the job; he had a position high enough to see the corporate machinations firsthand, yet had no day-to-day involvement, since he was thousands of miles away from San Francisco headquarters, busy trying to get good stories on a deadline. This mix of corporate history and memoir captures the story's economic and human sides, although at times it's hard for readers to keep track of the characters and events. Despite having a limited initial audience—how many people really want to read about a magazine that croaked not long after its second birthday?—it serves as a fantastic testament to a bygone era.