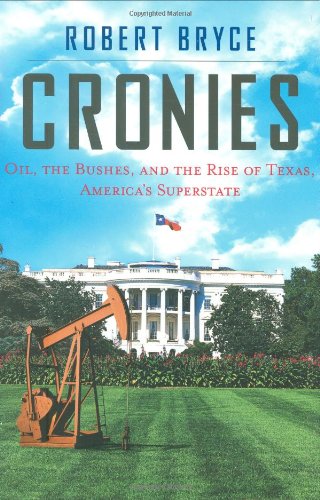 CRONIES: Oil, the Bushes, and the Rise of Texas, America's Superstate

Journalist Bryce, whose previous book, chronicled the rise and fall of Enron, now recounts how Texas rose over the past 60 years on a tide of oil to become the pre-eminent focus of American economic and political power. Bryce quickly sketches the emergence of the modern energy industry with the discovery of huge oil deposits in East Texas. He then turns to his central story, how Texas-based business empires like Exxon Mobil, Hunt Oil, Halliburton, and Baker Botts, the firm of James Baker III, have heavily promoted the careers of favored politicians going back to Lyndon Johnson. In return, Bryce shows, the oil industry and its tributaries have received lucrative government contracts, favorable tax treatment and kid-glove regulatory policies. Although Bryce devotes chapters to LBJ and his protégé, Democrat-turned-Republican John Connally, he reserves his special wrath for conservative Republicans like Dick Cheney, Tom DeLay, James Baker and especially the Bushes. He contends that the market-shaping power of Texas oil inspired the creation of OPEC, and that generations of politicians, led by the Bushes, have tailored U.S. foreign policy to cater to Arab dictators and the Texas firms that serve them. There's little in Bryce's book that is freshly revelatory, and his prose is sometimes awkward, sometimes clichéd ("lap of luxury," "spending money like a drunken sailor," etc.). But in this election year, partisans looking for evidence of Republican corruption will find plenty of tidbits here.