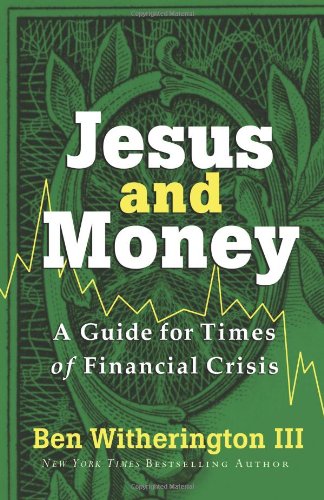 Jesus and Money: A Guide for Times of Financial Crisis

In this comprehensive review of statements in the Bible about economics, wealth and poverty, New Testament scholar and author Witherington ( ) analyzes canonical texts and their contemporary applications for Christians. Aiming to help the faithful avoid perils of “selective misuse” of scripture (the sin of prosperity preachers who focus on the Jabez prayer and isolated wealth proverbs), Witherington uses a creation theology lens: “all things ultimately belong to God.” While acknowledging the wisdom of Old Testament guidance, the author urges a “New Testament theology of stewardship and giving,” which calls Christians, guided by the Lord’s Prayer, beyond tithing to sacrificial giving. From unpacking perplexing gospel stories like “the dishonest steward” to offering concrete advice on how to separate from a culture of conspicuous consumption (discerning between necessities and luxuries and practicing debt forgiveness are among the practices he advocates), this cogent, accessible scholarly analysis contributes to the current economic conversation and urgently calls people of faith to review and reform their role as God’s stewards. Appendixes include popular Christian myths about money, and a powerful and apt 18th-century sermon on money by John Wesley.