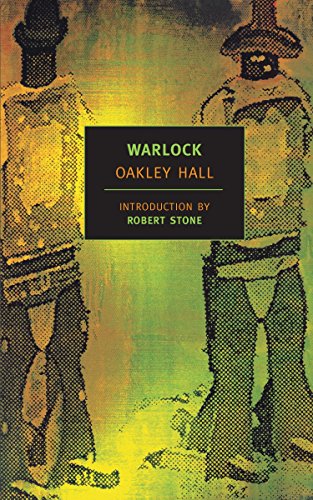 Hall's brilliant, complex take on the American western, first published in 1958, more than stands the test of time. A newly hired gun-slinging lawman, Clay Blaisedell, tries to restore order to the mythical silver mining town of Warlock, Calif. His reputation for violence serves him well during the first robbery on his watch, but his quick trigger finger, and that of deputy John Gannon, also get him in trouble. A bizarre killing spree (covertly perpetrated by Blaisedell's best friend, a murky political figure named Tom Morgan) and an impending miners' strike (one that allows gang leader Abe McQuown to mount a charge against Blaisedell and Gannon) set up the inevitable final, blazing set of confrontations. Hall, who has written more than 20 novels, taps into the mythic essence of the Wild West with a potent combination of dense but fast-moving prose; a colorful cast of violent, corrupt characters; and a diabolical, ethically neutral worldview. His prosaic tracking of the town's violently shifting nodes of power is prescient and brings Cormac McCarthy to mind as the story unfolds. No account of the fictions of the American West can be complete without reconsidering this revelatory novel.