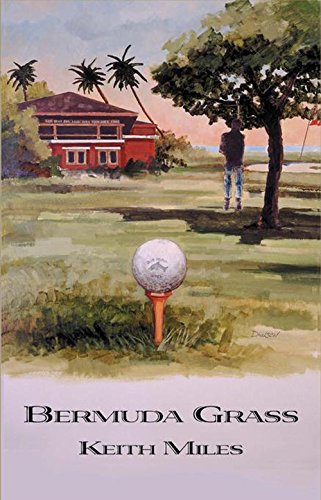 In this absorbing, accessible mystery from the prolific Miles, golf pro and former British Open–winner Alan Saxon (last seen in 1991's ) agrees to help design a new golf course for a Bermuda hotel, using a new hybrid grass strain (), but his troubles begin even before he steps off the plane from England. A divorced dad, Alan has brought along his college-age daughter, Lynette, and at her insistence, an Oxford friend of hers, Jessica Hadlow. A dominating, spoiled and outspoken sexpot, Jessica quickly derails Alan's plan to enjoy a little holiday time with his daughter. Alan's architect partner, Peter Fullard, says things aren't going well with the golf course's construction, and they're made much worse when Alan discovers the body of a murdered man in the middle of the course. Then Lynette and Jessica get abducted. Alan struggles with Jessica's father, a wealthy businessman, from whom Jessica clearly derives her rude and arrogant manner, as well as with the police, the hotel management, Lynette's mother and his own guilt for not monitoring the two young women more closely. A seductive, long-legged golf enthusiast and Peter's threat to quit the project enormously complicate the picture. Miles has something for everybody in this delicious entertainment: a surprise villain, violent fisticuffs, an excellent golf game, lovely women, some sex, fine detective work and a stunning climax.