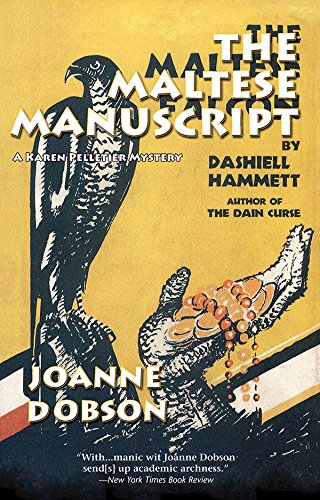 In her fifth Prof. Karen Pelletier mystery, Dobson () offers an academic novel both gutsy and romantic. Sound contradictory? It is, thanks to bestselling feminist author Sunnye Hardcastle, herself a dozen or so contradictions, who comes to Enfield College in Massachusetts with her rottweiler, Trouble, to speak on the hard-boiled women's detective novel at an English department conference. But trouble dogs Sunnye. Lavishly expensive texts and even a manuscript of Dashiell Hammett's disappear, despite a tight alarm system at the college library. Karen ends up hiding Sunnye from the local police, even though this brings down the wrath of Lt. Charlie Piotrowski, Karen's he-man lover, who's looking into the thefts. Murder muddles their affair, as well as the criminal investigation, which leads to two houses holding fabulous libraries, including many first editions, signed copies and manuscripts with marginal notes. Dobson's obvious knowledge of, and respect for, mystery and detective fiction is immense. She takes the reader on a glorious tour, describing everything from comic books to anthologies. Even the most moral mystery fans will understand why a person would want to purloin even one or two of these treasures.