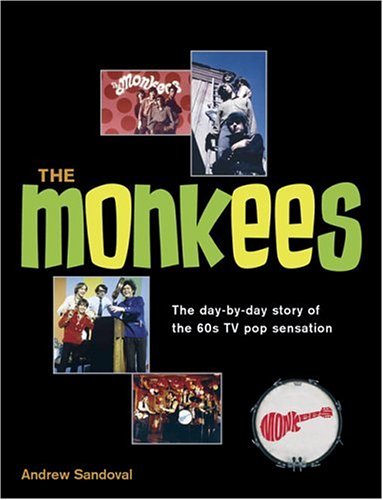 The Monkees: The Day-by-Day Story of the '60s TV Pop Sensation

Music historian Sandoval obsessively covers concerts, recordings and TV in pursuit of all Monkees trivia. Beginning with the 1942–1945 births of the quartet members (Peter Tork, Michael Nesmith, Micky Dolenz and Davy Jones), Sandoval traces their solo careers until the four were brought together in 1966 for NBC's TV series, followed by hit albums through the late '60s. With a complete "Songography," 135 illustrations, a TV episode guide, lengthy interview quotes and exhaustive research through thousands of press clippings, Sandoval and designer Paul Cooper deliver a strong package, including captivating notes on Jack Nicholson's soundtrack work for the 1968 Monkees movie, , which was made the year before Nicholson gained recognition as an actor in . Unfortunately, the book has many speculative passages and an awkward use of present and future tense, resulting in such strained sentences as "No tapes will survive from this date, and it is quite possible that no takes are made today. Peter will return to the song in January." All the same, devoted Monkees fans will be pleased.