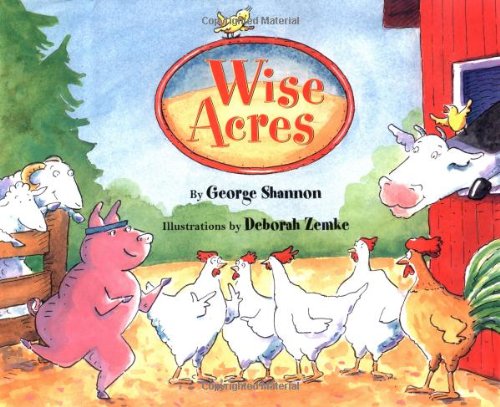 Zemke's ( ) watercolor-and-ink renderings of the barnyard denizens on Wise Acres farm are the main attraction in this trio of stories. Janet, a diving pig (her specialties include the "Bacon Buster") attempts to retrieve a submerged tambourine, lost during some enthusiastic shaking by Pearl the nanny goat; Vern, a ram who yearns for mail, receives individual letters of the alphabet from some well-meaning chickens; and a vain turkey named Ted decides to fight wrinkles with shoes made from pine cones: "It hurts so much to walk," he boasts to his friends, "I haven't thought of anything else since I put them on!" Although a goofy logic bubbles through the stories (when Doug the rooster remarks that the one envelope that Vern receives is empty, Vern replies, "No news is news, as knows"), Shannon's ( ) writing is uncharacteristically static. Without a comic rhythm or arch point of view, the prose often feels like a well-intended joke gone flat. But Zemke's artwork, brimming with whimsy and wit, buoys the book. Her precise ink line becomes a kind of visual straight man to the shenanigans, while her characters exude the manic intensity and earnestness that are the marks of true silliness. Ages 4-8.