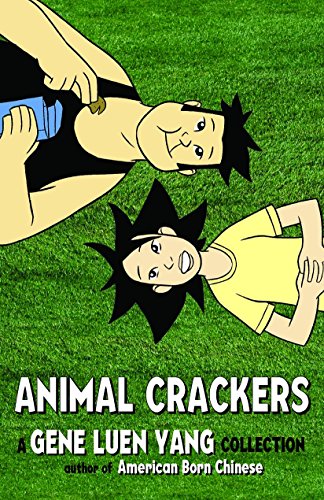 This early work from the author of the acclaimed shows that Yang's work has matured significantly. What it does share with his later comics is a tendency toward nonstereotypical Asian-American lead characters. Featuring a secret society of formerly religious aliens devoted to saving the human race, and baked goods that can be turned into cute but demonic monsters by a person's sins, is charming and funny but lacking in focus. Why must you plug a television into your left nostril in order to talk to the aliens of the San Peligran Order? Why does a brief moment of shared telepathy lead to animal cracker demons made out of hate? Who knows. Yang's art is already very strong, with a level of vibrant visual storytelling and pure potential that makes his Xeric Award for this book understandable. All clean lines and expressive characters forever making irresistibly funny faces, the world of is visually appealing. Aimed at the young adult market, this book will appeal to Yang fans who want a look at his early work and readers who like such surreal humor as Monty Python.