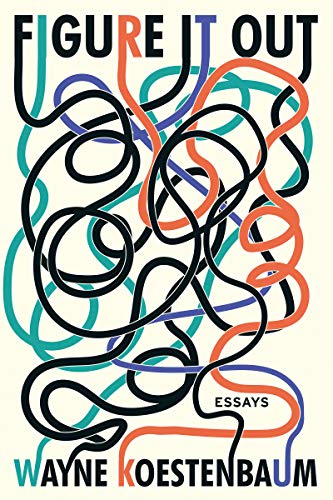 Figure It Out: Essays

Koestenbaum (Camp Marmalade), a poet and novelist, presents 26 nonfiction pieces, most previously published, in this inventive but self-absorbed collection. Spiraling in structure and dizzyingly varied in theme, the essays are peppered with reveries and fantasies, suggesting a kind of ramble through Koestenbaum’s consciousness. He muses about artists of all sorts—writers, painters, singers, composers, sculptors, photographers, and filmmakers—and his eye may be caught by Picasso or Giacometti, or his ear by the recordings of Vladimir Horowitz or the compositions of Iannis Xenakis. He ponders how Emily Dickinson elides the boundaries between prose and poetry, and takes on “Punctuation” with a nod to, among others, Hannah Arendt, whose writing displays the “weight of parenthetical information, subordinate yet urgent.” “Occasionally,” Koestenbaum opines, “I intend my writing to be comic,” particularly in his faux advice columns, including the title essay and “18 Lunchtime Assignments.” Themes of sexuality and gender are pervasive, typically in eye-catching declarations —“I want the liberty to use the word penis as a mutating signifier”—which some may find provocative, others tiresome. There’s fun and games and erudition throughout, but one has to be a card-carrying Koestenbaum fan to get into the full spirit of this assemblage. (May)
close
Details