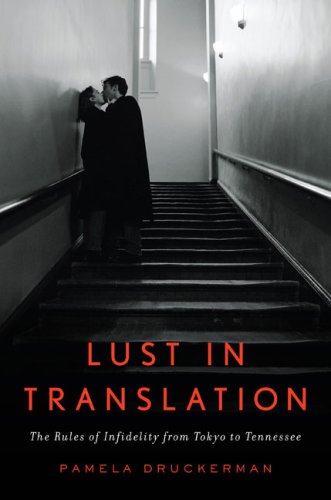 Lust in Translation: The Rules of Infidelity from Tokyo to Tennessee

Former foreign correspondent for the now living in Paris, Druckerman offers an anecdotal rather than a scholarly exploration of the international etiquette of adultery. From American prudishness about the subject to French discretion, and from Russian vehemence about the obligatory affair to Japanese adherence to the single marital futon, one factor rings true in all cases: people lie about sex. Druckerman interviews numerous adulterers, starting with the conflicted Americans who "gain status by radiating an aura of monogamy" while sneaking around on the side; guilt more often than not brings them to confession and absolution by therapy. Druckerman is at pains to uncover reliable statistics about infidelity where such research is suppressed, such as in Islamic countries or those formerly Communist; in contrast, Finland demonstrates the best sex research, e.g., clearly half of men there enjoy "parallel relationships." Druckerman concludes from one study that people in warmer climes cheat more (Scandinavia is the exception), while people in wealthy countries tend to cheat less than those in poor countries (exception: Kazakhstan). Druckerman found that the rules of sexual cultures differ widely: adultery is the least dangerous social evil in Russia, while in Japan, buying sex doesn't count as cheating. Druckerman's work is quirky, digressive and media quotable.