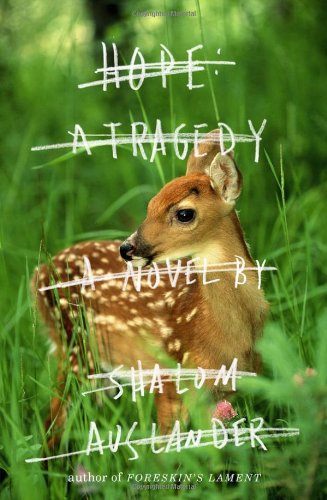 Cultural anthropologists trying to figure out if there really is a recognizably Jewish voice and sense of humor, and if so, how it mixes and matches its key elements of self-deprecation, mordant compliance, hypochondria, and a total lack of surprise when disaster occurs, should consider Auslander’s debut novel. The author’s memoir, Foreskin’s Lament, was about growing up in and leaving the Orthodox Jewish community; this novel’s hero, Solomon Kugel, isn’t observant, but he’s still locked into a relationship with a God he “could never believe in... but he could never not believe in, either.” And with a mother who insists she’s a Holocaust survivor, major money problems, a farmhouse that’s not only on the hit list of a local arsonist but also features an unwanted occupant in the attic, he’s fully immersed in what Philip Roth (an obvious influence, down to a shared obsession with Anne Frank) once called “the incredible drama of being a Jew.” Things start out hilarious and if the book wanes a bit as life keeps getting worse for Kugel, God’s plaything, that’s okay. As funny as it is, the novel is also a philosophical treatise, a response—ambivalent, irreverent, and almost certainly offensive to some—to the question of whether art and life are possible after the Holocaust, an examination of how to “never forget” without, as Kugel’s infamous attic occupant puts it, “never shutting up about it.” (Jan.)
close
Details