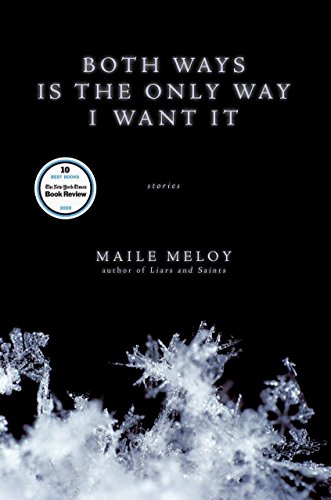 Both Ways Is the Only Way I Want It

Meloy ( ) hits some high notes in these stories of people juggling conflicting emotions with varying shades of success. In “The Children,” a man's resolve to leave his wife for his now-grown children's former swimming instructor is unexpectedly “doomed to ambivalence and desire” when he's confronted by the comforting “habit of his marriage.” Marital tensions are also at the heart of “O Tannenbaum,” in which a couple, while hunting for a Christmas tree with their daughter, pick up a stranded couple whose bickering casts into relief the cracks in their own relationship. Other pieces focus on loneliness, as in the opening story about a young ranch hand's efforts to connect with a lawyer moonlighting as a night-school teacher, or as in “Agustín,” where an elderly widower yearns for a lost, illicit lover. Meloy's characters frequently leave each other or let each other down, and it is precisely that—their vulnerabilities, failures and flaws—that make them so wonderful to follow as they vacillate between isolation and connection.