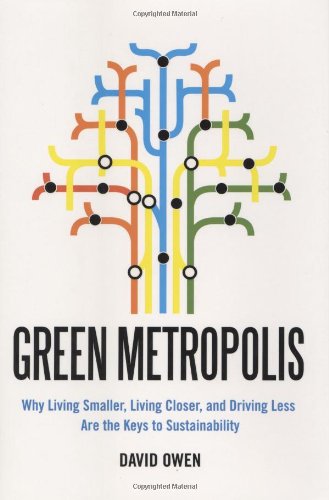 Green Metropolis: What the City Can Teach the Country About True Sustainability

While the conventional wisdom condemns it as an environmental nightmare, Manhattan is by far the greenest place in America, argues this stimulating eco-urbanist manifesto. According to Owen ( ), staff writer at the , New York City is a model of sustainability: its extreme density and compactness—and horrifically congested traffic—encourage a carfree lifestyle centered on walking and public transit; its massive apartment buildings use the heat escaping from one dwelling to warm the ones adjoining it; as a result, he notes, New Yorkers’ per capita greenhouse gas emissions are less than a third of the average American’s. The author attacks the “powerful anti-urban bias of American environmentalists” like Michael Pollan and Amory Lovins, whose rurally situated, auto-dependent Rocky Mountain Institute he paints as an ecological disaster area. The environmental movement’s disdain for cities and fetishization of open space, backyard compost heaps, locavorism and high-tech gadgetry like solar panels and triple-paned windows is, he warns, a formula for wasteful sprawl and green-washed consumerism. Owen’s lucid, biting prose crackles with striking facts that yield paradigm-shifting insights. The result is a compelling analysis of the world’s environmental predicament that upends orthodox opinion and points the way to practical solutions.