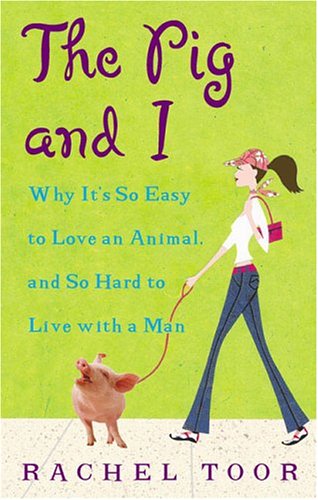 THE PIG AND I: Why It's So Easy to Love an Animal, and So Hard to Live with a Man

In this humorous if self-indulgent memoir, Toor takes readers through a string of romantic relationships with nice, eager-to-please men (whom she compares—both favorably and unfavorably—to dogs), spicing up the narrative with stories of how animals are far superior to men (and how she learned, among other things, to recognize her limitations in life thanks to a "diabolically clever" Vietnamese potbellied pig). As early as age five, Toor made "no distinction between the human and canine," and as she got older, it became clear that throughout her life—from childhood to college, several careers (including a stint in publishing), marriage, divorce and a menagerie of boyfriends—her relationship with her pets was the only thing that let her reach "the most tender, vulnerable parts" of herself. Toor renders such animals as a grumpy "bitch rat" named after scarlet-lettered Hester Prynne and a willful pony named Pepper who desperately wants to go inside the house as complexly as she depicts the decidedly mixed bag of men she encounters (a saggy, ponderous physics professor; a studly physics tutor; a balding, mustachioed Jewish doctor). It's consistent but one-trick-pony amusement, and Toor's deep insight into and focus on animals may prove to be both her strength and weakness in attracting readers, animal lovers or not.