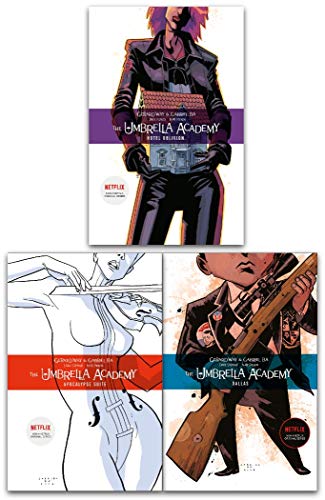 The second installment in this Eisner-winning series, is even more surreal and darkly quirky than its predecessor. The Umbrella Academy is a group of superheroes who were mysteriously born at the same time, adopted and raised together as a family and a team. Now adults, their heroic and family dynamics are traumatized and dysfunctional, despite their love for one another. In this volume, the bizarrely childlike time-traveling team member Number Five recruits his siblings to right a wrong—to save President Kennedy before he is assassinated, possibly saving the world in the bargain. But in the tradition of dysfunctional families, they overshoot the mark by three years and end up in Vietnam in the middle of the war and opposed by a Machiavellian super-intelligent goldfish. Way’s nuanced, complex writing and Bá’s magnetic, lush art continue to click together like a finely tuned machine. hits a sweet spot, appealing to mainstream audiences and hardcore comics fans alike, not to mention a legion of teenagers drawn by Way’s other role as lead singer of the popular band My Chemical Romance.