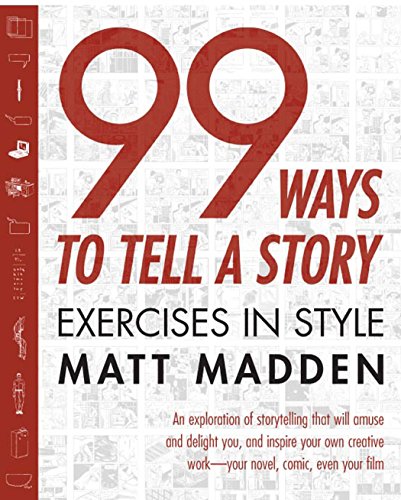 99 Ways to Tell a Story: Exercises in Style

Retelling the same one-page comic 99 different ways sounds boring, but Madden, a leading proponent of the value of formalist exercises, demonstrates how well boundaries can drive creativity, inspired by the similar work of Raymond Queneau. A new discovery awaits the reader on every page. The basic scene is a nonstory about a man who forgets why he's looking in the refrigerator. In the variations, new elements are introduced and removed: different characters, more panels, fewer closeups, flashbacks, text-only or a focus on sound or color effects. Madden acknowledges the history of the medium with allusions to various genres and characters (including the Yellow Kid, Krazy Kat and Winsor McCay's Rarebit Fiend). Favorites include a how-to on building a comic, a palindromic story that reads the same backward and forward, and a calligram (with text formed into a question mark shape). The book's format is ideal, with each page of comics facing a small identifying label, so approaches don't compete with each other, yet pages placed in sequence add up to another narrative. Anyone interested in comics or storytelling will learn much about the interaction between format and content through comparison of Madden's many ingenious approaches.