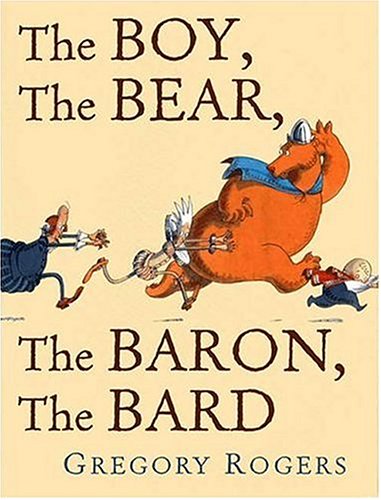 THE BOY, THE BEAR, THE BARON, THE BARD

Australian artist Rogers's ( ) very funny wordless escapade, which gets even better with rereading, opens when a modern-day boy boots his soccer ball through the backstage window of an empty theater. He retrieves the ball, looks out on rows of empty seats, then tries on a blouse and red cape that he finds in the costume trunks. (There's a strange, spotlit glow about the cape.) When the ball bounces through the curtains again, the boy darts after it, tumbles into a time warp and emerges on the open-air stage of the Globe Theater. Gap-toothed, poxy groundlings hoot at his entrance, but a certain red-haired playwright trips on the ball and becomes as enraged as any Keystone Kop. Pursued by the Bard, the boy dashes outside, into a 17th-century London dotted with timbered houses and rival theaters. Here, the boy rescues a caged Bear and, hand-in-paw, the two elude the snarling Shakespeare; when they detour into a dungeon, they meet a Baron whose anxious glances at an outdoor chopping block and a guy with an axe suggest that an execution will soon occur. Rogers's sequential art and comic timing recall Quentin Blake's . He uses a caricaturish style to animate the slapstick characters, while his English architecture and countryside are technically precise. London Bridge features rows of heads on stakes, and aristocrats cruise the Thames on a party barge. With its harried pace and sportive sight gags—not to mention its undignified rendering of Shakespeare—this chase comedy proves to be a bravura performance. Ages 5-9.