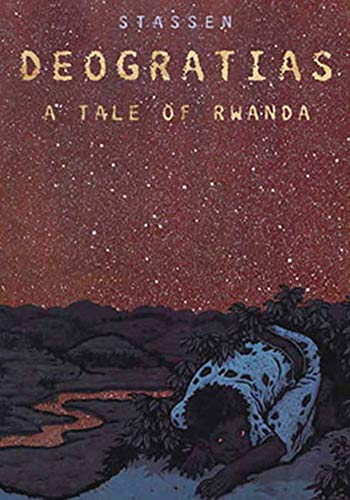 Deogratias: A Tale of Rwanda

Deogratias means "thanks be to God," and it's the name of a boy coming of age in Rwanda in 1994. He is just figuring out what it means to be a man, and wrestling with the feelings he harbors toward two sisters, Apollinaria and Benina. The sisters are themselves struggling to establish their own place in society and understand the difficult decisions their mother, Venetia, has made—Apollinaria's real father is a white Catholic priest, and Venetia has been forced to leave the country in the past to save her daughters. But Deogratias is Hutu, and they are Tutsi, a simple fact that renders all of their internal battles irrelevant. This award-winning comic was originally published in Belgium in 2000 and has an introduction explaining the history leading to the Rwandan genocide. The heartbreaking power of is how it keeps the reader distant from the atrocities by showing the trivial cruelties of everyday life before and after the genocide. Stassen is a journalist who lives in Rwanda, and his art is bold and clear, using different color palettes to seamlessly shift between before and after. There is no catharsis, only the realization that even justice turns its champion into a monster.