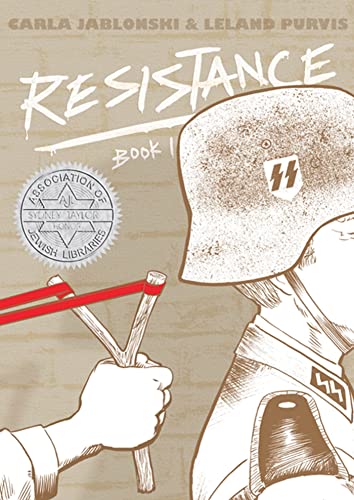 As the old saying goes, everyone was in the French Resistance, and that also goes for the cast of this well-intentioned but clumsy YA graphic novel set in Vichy France in 1942. It centers on a plucky tween boy named Paul Tessier, an aspiring artist whose father is a POW. After Germans take over his Jewish friend Henri Levy's hotel, Paul and his sisters are drafted into the Resistance and journey to occupied Paris with Henri to pass along secret messages to their comrades. There are few moments of genuine suspense or surprise, just a lineup of predictable story beats: earnest discussions of how Jews are just like everyone else, a flash of violence to demonstrate that the Nazis are bad news, and an emotional family reunion. (A scene in which the children improvise Henri's bar mitzvah ceremony is pure kitsch.) Purvis has a rough, expressive line that works nicely for his frequent close-ups on characters' faces, but often dissolves into scribbles when he pulls back to show bodies and settings. The two-page author's note by YA author Jablonski at the end addresses the moral ambiguity of Vichy France more insightfully than anything in the rest of the book. Ages 12–up.