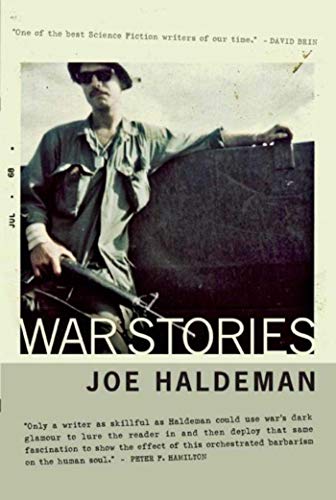 Haldeman ( ) is much more than just a military SF writer, but it's clear that Vietnam remains central to his existence and the nightmare inspiration for some of his best work. This collection brings together the author's two Vietnam novels, the autobiographical (1972) and the later, more sophisticated (1994), along with a variety of stories and poems. The shorter work is all Vietnam-inspired, but each piece also qualifies as SF or fantasy. In the powerful "A Separate War," a sequel to the author's , two soldiers have been sent on a series of missions at translight speeds. Though only a few years have passed for them, centuries have gone by on Earth and the soldiers find themselves more and more alienated from the culture they're supposedly fighting to protect. Two other stories, "The Monster" and "Graves," take place in Vietnam and involve possibly supernatural encounters with creatures brought to light by the horrors of war. Far from escapist, Haldeman's art provides a devastating retrospective of a particularly black time in American history.