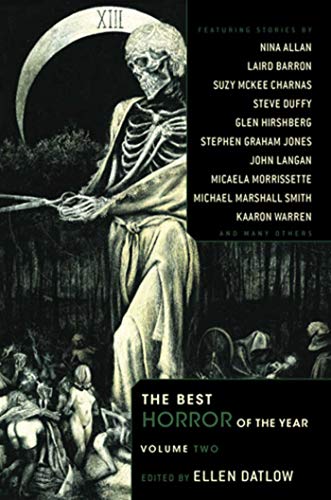 The Best Horror of the Year, Vol. 2

Prolific anthologist Datlow continues her fine showcase series (originally part of the long-running Year's Best Fantasy and Horror) with 17 scary stories published in 2009. Perhaps the creepiest is “each thing i show you is a piece of my death,” in which Gemma Files and Stephen J. Barringer collect e-mail and other documents about a mysterious naked man who crashes the sets of movies and TV shows. Michael Marshall Smith's “What Happens When You Wake Up in the Night” is a classically creepy tale, and Stephen Graham Jones offers a twisted take on snake-oil salesmen in “Lonegan's Luck.” There are a few underwhelming choices—notably Nina Allen's weak “The Lammas Worm”—and readers of Datlow's other anthologies will see many familiar names, but overall, this is a worthy addition to the series.