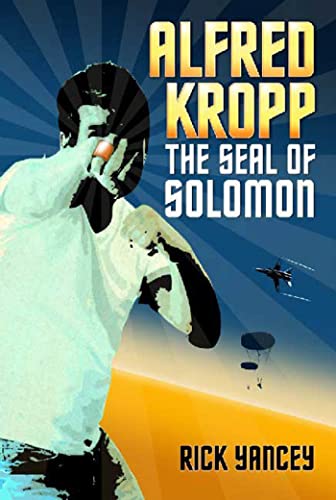 Alfred Kropp: The Seal of Solomon

After saving the world in , our regular-guy hero is unceremoniously returned to foster care in Knoxville, Tenn. Hounded at school as a freak, living with wretched "professional" foster parents, Alfred is bored and depressed. He believes he's hit bottom until he is kidnapped, first by rogue OIPEP agent Mike Arnold, then by the Office of Interdimensional Paradoxes and Extraordinary Phenomena itself, at which point his classmates' harassment seems idyllic by comparison. For reasons Alfred doesn't immediately understand, his presence is vitally necessary to foil Arnold, who, after being fired by OIPEP, stole two ancient artifacts from the agency's vault: a ring belonging to King Solomon, and a vessel containing thousands of demons that have been locked inside for 3,000 years (and are really pissed off about it). Teamed with Op Nine, OIPEP's top agent, Alfred heads out on a whirlwind mission to recover the artifacts, traveling to the Sahara, Chicago and home again as the planet erupts in his wake. The emotional core of this novel involves likeable Alfred's unresolved issues about the death of his mother at age 12, and his sense of loss is palpably heartbreaking. The villain Arnold's issues remain far murkier, his motivation subsumed by the same Hollywood action-flick pyrotechnics—explosive showdowns, multiple near-brushes with death—that made the first book a hit with kids who might otherwise be playing video games. Ages 12-up.