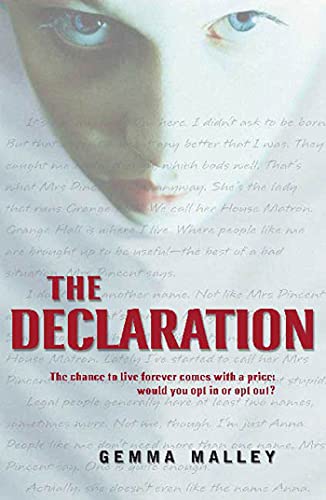 Set in the year 2140 in England, this chilling dystopian tale explores issues of overpopulation, global warming and the ethics of immortality. A drug called Longevity has made life without death a reality for the masses—but driven humanity to the brink of a Malthusian catastrophe. Orwellian-like Authorities have all but outlawed procreation in an effort to stabilize the population. Those born illegally are inevitably captured, sent to processing facilities and taught to be Valuable Assets to society, i.e., slaves to the immortals. Surplus Anna has spent most of her 14 years inside Grange Hall, where she has learned to hate not only herself but also the parents who selfishly broke the Declaration in giving life to her. But the arrival of a rebellious Surplus named Peter, who has lived on the Outside, brings Anna disturbing revelations about the world and her particular place in it. In her first YA book, Malley (British author Gemma Townley writing under a pseudonym) successfully imparts a strong message about the need for continual change (“Nature is not about preserving old things, but about creating new ones. New life. New ideas”). Although the backstory and world-building elements seem slightly underdeveloped, readers with a taste for speculative fiction will enjoy this relevant read. Ages 10-up.