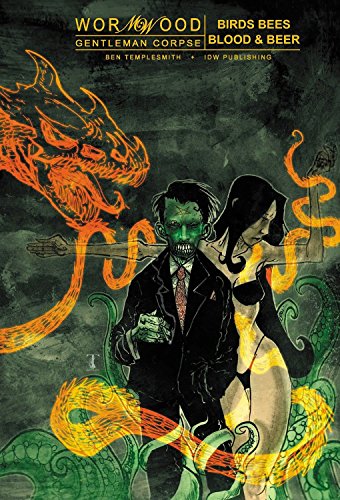 Just when John Constantine was starting to be a bit rumpled, along comes another nattily dressed smart-ass who does business with the unholy darkness; this time, he's a little closer to one of them. Templesmith's Wormwood is a preternaturally cheery corpse with an ever-present cigarette and pentagram tattoo on his forehead to match the psychotic grin. In this debut, the gentleman corpse comes across a plot by a cabal of demons to infiltrate the world of humans and generally lay waste to it all in the nastiest way possible. With a game pair of sidekicks—the hulking robot Pendulum and lithe punk assassin Phoebe—Wormwood does battle with a full complement of foul netherworld beasties. This material could come off as rank at worst and derivative at best, just another horror comic with a yen for desecrated corpses. But in a wry manner, Templesmith ( ) tweaks a surprising amount of humor out of the overdone scenarios, cloaking it all in darkly layered and intricate art that recalls . One assumes more Wormwood tales will follow, along with more people suffering from, as a policeman refers to it, "extreme cases of, uh, death."