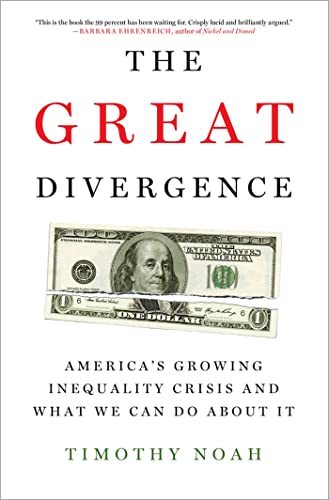 The Great Divergence: America’s Growing Inequality Crisis and What We Can Do About It

In this comprehensive, fair-minded, and lucid account, based on his award-winning articles for Slate, New Republic columnist Noah examines growing income inequality in the U.S., where for 33 years, the wealthy have acquired a growing share of the nation’s income while the middle class saw its share shrink. Noah synthesizes work by economists, sociologists, and political scientists to explain the phenomenon to nonexperts. He shows how income inequality first came to be measured in the early 20th century, and relates the perspectives of scholars and politicians at a time when the share of the nation’s income going to the wealthy either shrank or remained stable during the 1930s through the late 1970s, before powerfully reversing course in the 1980s. Noah studies the contributing factors (immigration, the shortage of better-educated workers, trade with low-wage nations, globalization, the fall of the labor movement, and government policy), and considers the vast changes in the corporate and financial industry that led to a “grossly misshapen” wage structure, where a CEO now makes 262 times more than the average worker. While this affects many industrialized democracies, income inequality is far greater in the U.S., resulting in a less upwardly mobile society. Noah makes a convincing and passionate case for why rising inequality harms a working democracy, and suggests sensible, though not always politically viable, solutions. Agent: Andrew Wylie, the Wylie Agency. (May)
close
Details