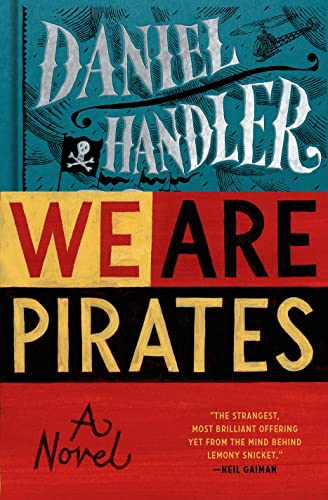 Why do pirates appeal? Because, as 14-year-old Gwen Needle puts it, when you’re a pirate, you can “go anyplace” and “do whatever you want.” Compelling ideas to Gwen and her friend Amber, whose supervised lives—Gwen is not even allowed to take the bus alone—are the opposite of pirate freedom. The pirate lore comes from Amber’s grandfather, Errol, who’s just as trapped, in his case by Alzheimer’s and an old-age home he loathes. While Gwen and Amber visit Errol and plot kidnap and ruin together, Gwen’s father, Phil, tries to make it big in radio, which might be consolation for a wife who doesn’t like him much, a house he can’t afford, and a very angry daughter. Can a couple of teenagers, a befuddled old man, and a nursing home orderly really steal a boat and wreak havoc in San Francisco harbor? Sure, says Handler, crossing and mixing genres—dark and light, YA yarn and midlife doldrum—while making readers root for his 20th-century privateers. The book never quite decides how serious it wants to be, becoming dark when the adventure turns violent, then shirking some of the consequences of that darkness, but it does offer a jaunty and occasionally jolting, and honest take on the discomforts of youth, midlife, and old age, and how ineffective we are at dealing with them. (Feb.)
close
Details