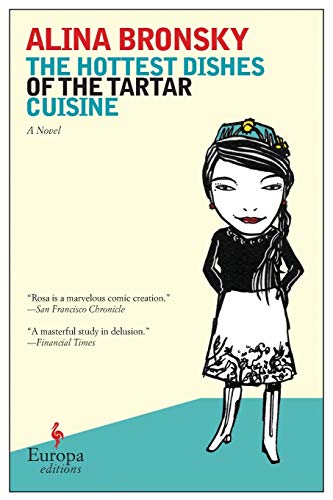 The Hottest Dishes of the Tartar Cuisine

Rosa Achmetowna, the frightening narrator of Bronsky's dark and wily latest (after Broken Glass Park), is a difficult person to like, much less love. She lives in a cramped Soviet apartment with her husband, teenage daughter Sulfia, and a nosy, disagreeable roommate. Brusque, brimming with bile, and ever judgmental, she is less than pleased when the "rather stupid" Sulfia winds up pregnant. Rosa immediately tries a variety of crude home remedies for aborting Sulfia's baby—but nine months later, Aminat, is born. Rosa is fundamentally nasty, yes, but she instantly falls in love with Aminat (who coincidentally bears a striking resemblance to Rosa), tries to wrestle Aminat away from Sulfia, and enjoys watching Aminat grow into a wild, willful thing as Rosa and Sulfia kidnap the little girl back and forth. Rosa's machinations grow increasingly devious until Aminat matures and comes to a crossroads of her own. Rosa is absolutely outrageous, a one-woman wrecking crew with no remorse, an acid tongue, and a conniving opportunist's sense of drive and desperation. Bronsky lands another hit with this hilarious, disturbing, and always irreverent blitz. (May)
close
Details