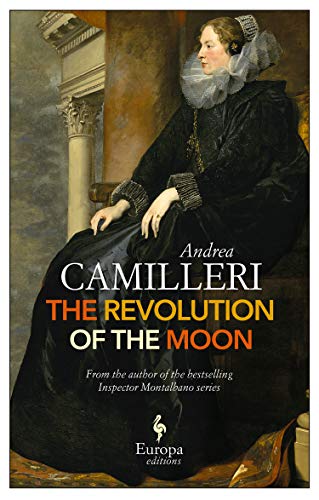 The Revolution of the Moon

Bestselling and award-winning Italian author Camilleri (the Inspector Montalbano series) offers a marvelous historical drama based on a true but little-known episode of 17th-century Sicilian history. In 1677, Sicily is ruled by Spain. When the Viceroy, the King’s representative, dies in office in Palermo, he names his wife, Donna Eleonora di Mora, as his replacement. The Holy Royal Council, six corrupt, venal officials, are outraged by the idea that a woman should govern Sicily. The councilors are all liars and thieves, and now they fear for their lives. They scheme to undermine her rule, but Donna Eleonora is a beautiful, shrewd, and very calculating woman, more than a match for these desperate and arrogant men. She understands them and cleverly thwarts every move they make, subtly setting them up for exposure, disgrace, and prison, especially those involved in the shameful, scandalous arrangement with the Holy Refuge of Endangered Virgins. However, one councilor, the bishop, has one card left to play, resulting in three murders, his fateful denunciation, and the surprise end to this excellent novel. (Apr.)
close
Details