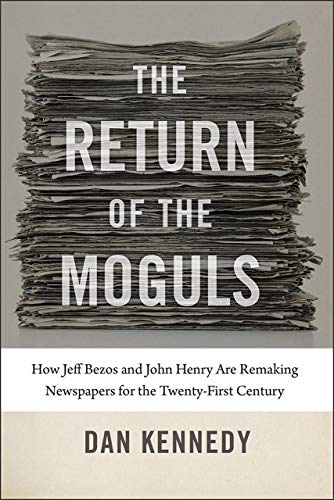 The Return of the Moguls: How Jeff Bezos and John Henry Are Remaking Newspapers for the Twenty-First Century

Kennedy (The Wired City) collects insights from case studies of three American newspapers, arguing that wealthy, civic-minded owners are key to the survival of newspapers in America. Focusing on the Washington Post under the leadership of Amazon founder Jeff Bezos, the Boston Globe under Red Sox owner John Henry, and California’s Orange County Register under entrepreneur Aaron Kushner, Kennedy looks at what led to the sale of each paper between the years 2012 and 2013 and the vitality of the businesses in the years since. The goal of all three organizations was to transition to a subscription revenue model, but the companies differed in their approaches. The Post under Bezos expanded national news coverage in an effort to amass a larger online audience, a portion of which pays for access and has made the paper the most successful venture of the three. At the other end of the spectrum is the Register under Kushner, who resigned as CEO in 2015 after financial trouble stymied his plan to develop the print newspaper. Much of the book chronicles the industry’s long and painful transition from print to online in the decades prior to the sale of each paper, and the narrative tends to get overloaded with digital jargon, focusing on minutiae such as how websites measure clicks for advertisers. The conclusions Kennedy draws are neither definitive nor terribly optimistic. The book reads more like a chronicle of the death of daily newspapers than a glimpse into their possible future. (Mar.)

This review has been updated. A previous version of this review contained a quote from the book which was presented out of context.