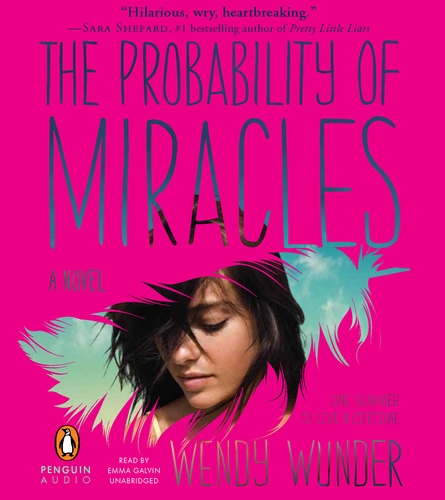 The Probability of Miracles

Seventeen-year-old Campbell Cooper is dying of cancer, although her family is unwilling to admit it. After Cam's high school graduation, her mother, Alicia, desperate for a miracle, moves Cam and her younger half-sister, Perry, from Orlando, Fla., to Promise, Maine, an en- chanted town replete with flamingos, blue dandelions, and endless sunsets. Emma Galvin's Cam is adorable but tough, and the narrator perfectly captures her dry, sarcastic wit. Galvin also uses a subtle accent for Cam%E2%80%94one that is a blend of the character's heritage: her father is Samoan, her mother from New Jersey. The rest of the major characters are unique and well rendered, from Cam's delicate, sickly friend, Lily, to her hunky love interest, Asher, and her Norwegian half-sister Perry. Additionally good are the voices lent to the many teens of Promise and Cam's spunky Nana from Hoboken%E2%80%94a voice Galvin absolutely nails. Unfortunately, many of the book's supporting cast sound too similar to Cam, and this takes away from the notable voice Galvin has created. Ages 14%E2%80%93up. A Razorbill hardcover. (Dec.)
close
Details