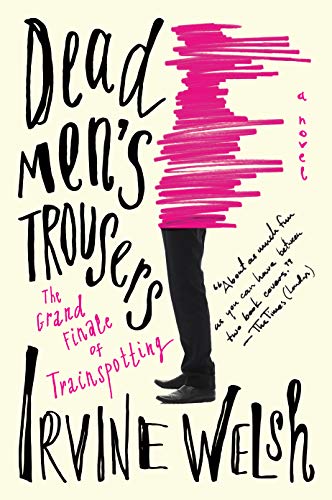 More than 25 years after they first appeared in Trainspotting, all four of Welsh’s hard-living Scottish friends reunite in Edinburgh, roped into an appropriately bizarre and macabre organ harvesting caper. Told from the perspectives of the four protagonists, the novel rolls slowly in the first half, updating their individual biographies separately—readers new to Welsh’s world need not be apprehensive—and setting up the brisker, and inevitably bollixed, execution of the theft plot. Two of these former reprobate mates have successfully escaped their pasts. Renton travels the globe as a music manager. Begbie, who runs into Renton on a plane in the opening chapter, is a successful artist living in California. Spud, whose narrative is most steeped in a slangy Scottish dialect, still lives on the edge and instigates the kidney-napping caper. Sick Boy, like Spud, is still in Edinburgh, and crashing with his sister, Carlotta, who screamingly blames him for the degeneration of her son, Ross, and husband, Euan, apparently on a debauched trip to Thailand. When the four finally get together, much comic mileage is wrung in rehashing old grievances. Not surprisingly, the crime unfolds like a Keystone Kops version of Ocean’s 11, but with an irrevocable final result. Welsh’s entire oeuvre crackles with idiomatic energy and brio, and this rollicking novel is no different. (Feb.)
close
Details