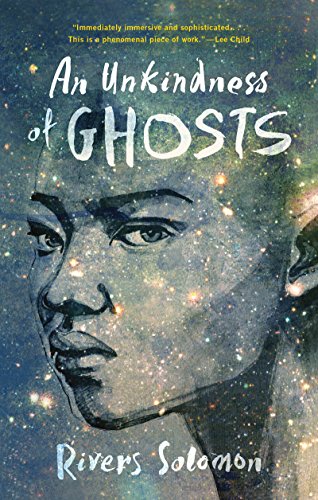 An Unkindness of Ghosts

Solomon debuts with a raw distillation of slavery, feudalism, prison, and religion that kicks like rotgut moonshine. On the generational starship Matilda, which will take hundreds of years to reach its destination despite traveling at a significant fraction of the speed of light, a tech-ignorant white supremacy cult called the Sovereignty runs on the labor and intimidation of a black enslaved class. This is worldbuilding by poetry; hard science fiction fans may look in vain for some of the elements they expect from a generation ship story, as the narrative instead relies on many layers of metaphor. Aster Grey, orphaned from birth and raised in slavery on deck Q, teaches herself medicine and much more. She discovers that notes handed down by her mother are encoded and may map the Sovereignty’s fatal weakness, but as the notes become shuffled, divided, damaged, and destroyed, it’s unclear whether Aster can ever fully decode them. Neuroatypical Aster is literal and unsparing as she examines her precarious life and flawed environment; she accepts the horrors of objective reality but struggles passionately with the allusions and evasions of human interaction. Solomon packs so many conflicts—chiefly concerning race, gender, and faith, but also patriarchy, education, mental illness, abortion, and more—into a relatively brief space that the story momentarily strains here and there to contain everything. The overall achievement, however, is stunning. Agent: Laura Zats, Red Sofa Literary. (Oct.)
close
Details