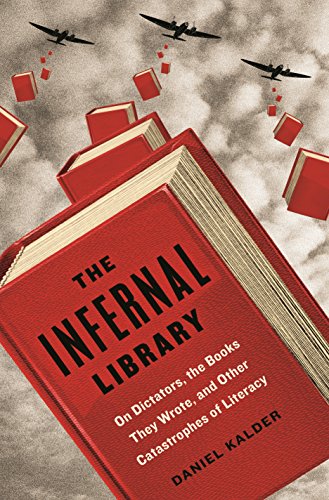 The Infernal Library: On Dictators, the Books They Wrote, and Other Catastrophes of Literacy

The 20th century’s most infamous dictators were also authors, often prolific ones, complementing the atrocities they visited on humanity with crimes against literature. Kalder (Strange Telescopes), a journalist with a nimble style and an eye for leaden prose, read the significant works from this benighted subgenre, from the vast theoretical corpus of Lenin, through Stalin’s The Foundations of Leninism, Hitler’s Mein Kampf, Mussolini’s My Life, and Mao’s Little Red Book. Kalder also extends his purview to the works of latter-day autocrats Fidel Castro, Mu’ammar Gadhafi, Saddam Hussein, and Turkmenistan’s Saparmurat Niyazov, whose spiritual, autobiographical tome, The Rukhnama, which Kalder encountered while living in Moscow, began his fascination with the subject. The substance of these books is largely beside the point, since, as Kalder observes, these autocrats’ texts were not about thinking, but about repetition. Moreover, his zesty put-downs should discourage all but the most serious scholar from actually poring over them. Of Hitler’s “almost 400 pages of gibberish,” Mein Kampf, he says that it doesn’t need to be read; “to provoke unease, fear, hatred, and terror, it need only exist.” The enduring significance of these books, Kalder shows, is as totemic objects. Kalder’s work is quite an accomplishment, and is the one book people interested in the terrible writing of dictators should read.[em] (Mar.) [/em]
close
Details