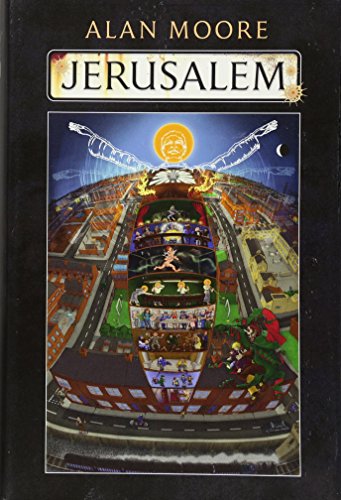 In this staggeringly imaginative second novel, Moore (Watchmen) bundles all his ruminations about space, time, life, and death into an immense interconnected narrative that spans all human existence within the streets of his native Northampton, U.K. Reading this sprawling collection of words and ideas isn’t an activity; it’s an experience.

The book is divided into three parts, each 11 chapters long, with a prelude and “afterlude.” The bookends involve Alma Warren and her brother, Mick, who as a child choked on a cough drop and died, only to be revived; their inquiries into the mysteries of death provide a faint glimmer of plot. The first section crisscrosses Northampton with startling chapters that introduce sad ghosts who drift around town, have sex with each other, and seek nourishment in the form of strange plants known as Puck Hats. Living characters include Ern Vernall, who survives a sanity-ending encounter with a talking painting while trapped on scaffolding, and Alma and Mick’s grandmother, May, who grieves the death of her too-beautiful daughter and becomes a “deathmonger,” overseeing local funerals and births. The second section takes place entirely between Mick’s death and his revival, with a long adventure in an afterlife only Moore could have imagined. The third and most difficult part is written in a series of literary pastiches, including a Beckett-like play and an entire chapter written in a language invented by Lucia Joyce, the institutionalized daughter of James Joyce.

Throughout, Moore conjures the specter of Joyce’s Dubliners, with dense paragraphs that go inside the minds of all the characters as they traipse about town. Some are stunningly aware of their location in Moore’s four-dimensional reality (Snowy Vernall, who experiences life as a constant state of déjà vu) and some painfully mired in a sordid now (mediocre middle-aged poet Benedict Perrit, who lives with his mother and finds inspiration only in the bottle).

Moore’s love of allusions, both historical and literary, leads him to create a web of references that may prompt attentive readers—and not just the future term paper writers who will find this a gold mine—to read along with a highlighter in hand. It’s all a challenge to get through, and deliberately so, but bold readers who answer the call will be rewarded with unmatched writing that soars, chills, wallows, and ultimately describes a new cosmology. Challenges and all, Jerusalem ensures Moore’s place as one of the great masters of the English language. (Sept.)

Heidi MacDonald is the graphic novels reviews editor for Publishers Weekly and editor-in-chief of the Beat, a news blog about comics.