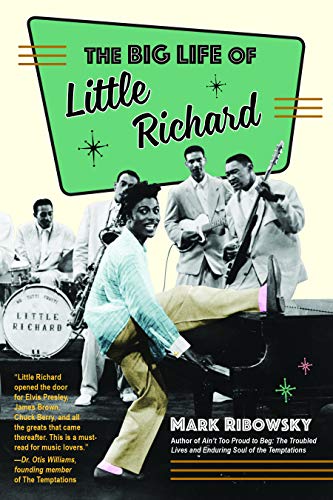 The Big Life of Little Richard

Ribowsky (The Supremes) rips it up with raucous prose in this affectionate biography of Little Richard (1932–2020). Ribowsky chronicles the life of Richard Wayne Penniman from his childhood in Macon, Ga., to his death in May 2020 at his home outside Nashville, Tenn. When Richard was 10, Ribowsky writes, he would sing gospels to sick people and touch them, and they’d swear they felt better. (Indeed, throughout his career, Little Richard claimed his music could “make the blind see, the lame walk, the deaf and dumb hear and talk.”) Ribowsky recounts how Richard wrote some of his biggest hits—“Tutti Frutti,” “Long Tall Sally,” and “Good Golly, Miss Molly”—while washing dishes at the Macon Greyhound bus station, and chronicles the ups and downs of Richard’s early record deal with Specialty Records in 1955 and his later, brief relationship with Vee-Jay Records. At the core of the book is Little Richard’s legendary stage persona, which influenced Elvis, James Brown, the Beatles, the Rolling Stones, and Otis Redding. Richard, Ribowsky astutely writes, combined gospel with the grittiness of blues and then amped it up with his fiery piano playing and singing. This entertaining, fast-paced biography will thrill fans of Little Richard and early rock and roll. (Aug.)
close
Details