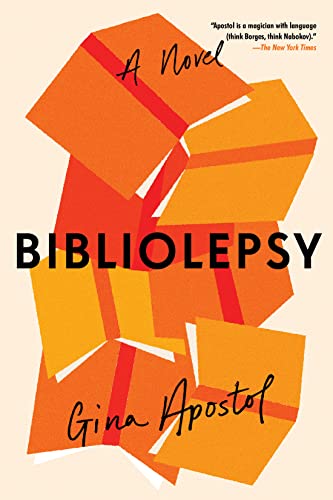 Filipino author Apostol’s extraordinary latest (her debut in the Philippines, arriving here after The Revolution According to Raymundo Mata) is a feverish tale of love and longing for the written word. In 1972, the year Ferdinand Marcos declares martial law in the Philippines, eight-year-old Primi Peregrino’s parents mysteriously disappear from an inter-island ferry and are declared dead. Primi’s father was an underground political cartoonist, and her mother was a beautiful but “crazy” amateur taxidermist. Whether a double suicide, accident, or something more sinister, their deaths leave Primi and her older sister, Anna, in the care of their rich and eccentric grandmother. Primi, a reading prodigy, experiences what she later dubs “bibliolepsy,” a sort of swooning rhapsody, when she reads texts such as The Brothers Karamazov or the poems of Estrella Alfon. Years later, at university, she seduces writers whose work she admires, mainly to stoke the lust for literature that saves her from the horrors and ennui of reality. Primi is incurably apolitical, but her involvement with writers and radicals, and Anna’s fanatical mysticism (she believes that prayer and positive energy will oust Marcos and somehow avenge their parents) sweep her up into the 1986 revolution. With acerbic wit, Primi expresses her jaundiced view of those who demonstrate in the streets (“The country had emerged as kitsch of the day, a panorama of many divisible scenes shot up as one gigantic yellow mushroom you could chew, and psychedelia followed”). Apostol’s language is a constant delight, frank and full of felicitous turns of phrase and abundant humor. Layered and fully realized, it’s deserving of several readings. Agent: Kirby Kim, Janklow & Nesbit Assoc. (Jan.)
close
Details