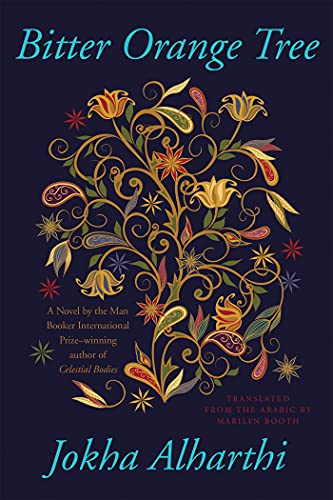 Man Booker International Prize winner Alharthi (Celestial Bodies) returns with a gorgeous and insightful story of longing. Zuhour, now at university in the U.K., spent her girlhood in a small Omani village, brought up mainly by a grandmotherly woman named Bint Aamir, whom Zuhour’s grandfather Salman had charitably taken in years earlier. Bint Aamir raised Salman’s son and, eventually, Zuhour, as Salman’s wife was too mired in depression and obsessed with piety to take responsibility. Bint Aamir gradually lets go of her dreams for a plot of land to tend and a husband and children of her own, takes comfort drinking coffee in the shade of her beloved bitter orange tree, and dies just before Zuhour leaves for college. Away, Zuhour is troubled by unsettling dreams of Bint Aamir and tries to cope through therapy and friends such as the wealthy, sophisticated Pakistani sisters Suroor and Kuhl. The latter is married without the knowledge of her parents to Imran, a handsome fellow medical student of lowly, rural origins, and Zuhour, Kuhl, and Imran form an exclusive triangle. Zuhour loves both, mainly the charming, taciturn Imran, whose humility, self-sacrifice, and agricultural roots inevitably remind her of Bint Aamir and the sense of belonging she misses so much. The bittersweet narrative, intuitively translated by Booth, is chock-full of indelible images symbolizing freedom struck down, such as a battered kite and a bird ripped to shreds. This solidifies Alharthi’s well-earned literary reputation. Agent: Jacqueline Ko, Wylie Agency. (May)
close
Details