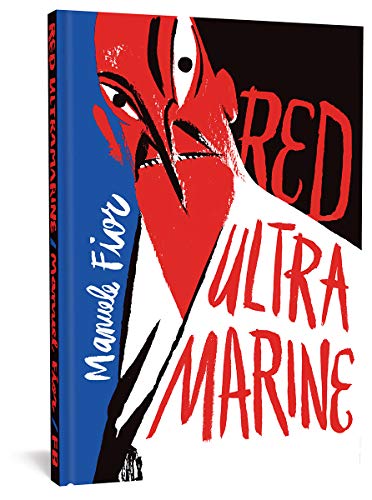 Fior weaves myth and modernity together to examine the destructive extremes of artists in this vibrant tale. Fausto, a young architect, has immersed himself to the point of isolation in his quest for perfection. Silvia, his doting girlfriend, consults a devilish doctor—and ends up thrown into the legends of ancient Greece, to observe Daedalus and Icarus before their fateful flight and carry back what she’s learned to her obsessive beau. Fior’s limited use of brushy red and black on white makes the transition between worlds seamlessly dreamy, in addition to highlighting the disturbed nature of his characters’ actions. Daedalus’s face is a crimson smear as he searches for his fallen son; Fausto, consumed by work, is a blank white space offset with huge, opaque glasses; and Silvia is marked by a port wine stain that places her eternally in-between worlds. Fior unites artists and muses across time, managing to blend their greatest successes with their most devastating failures in what amounts to a hallucinatory story of single-minded pursuits. Beyond a fable, this slim graphic novel enacts a passion play about the costs of creativity. [em](May) [/em]

Correction: An earlier version of this review misstated the name of the book's translator.