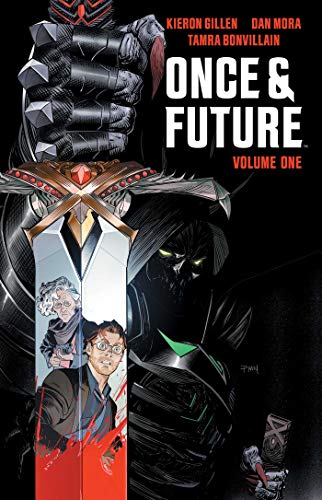 Arthurian legend and horror are gene-spliced in this modern-day dark fantasy by Gillen (the Die series) and Mora (the Klaus series). Rugby player/academic Duncan McGuire is called away from a disastrous first date by his fiercely independent grandmother’s nursing home, which she escaped after seeing a news report on a bizarre murder at an archaeological dig in Cornwall, Great Britain. Duncan locates his grandmother in the woods, where she unearths a cache of heavy ordnance and reveals her past as a monster hunter; none too soon, as the murder is tied to a scheme to resurrect a monstrous King Arthur—an Arthur of unprecedented terror. Not the noble, chivalrous figure of mythology, this hellish undead entity feeds on blood and raises the deceased to serve as his knights. He’s been called back by nationalistic cultists to preserve the “purity” of England for the English, threatening to destroy increasingly diverse modern Britain. Duncan embraces a destiny he’s unwittingly been groomed for since birth, as his family’s secret history unfolds and his mission to thwart the once and future king begins. This series launch gets off to a brisk and crisply-illustrated start, with Mora’s skillfully drawn action-packed panels lit up in a punchy color scheme by Tamra Bonvillain. It’s a fast-paced escapade well worth picking up for genre fans, and it will particularly pique the appetites of those who also nerd out on Arthurian mythos. (Mar.)

Correction: Kieron Gillen's name was misspelled in an earlier version of this review.