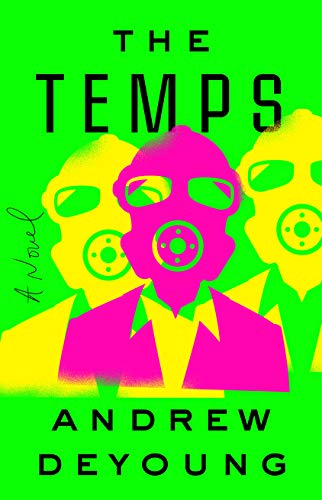 DeYoung’s diverting apocalyptic adult debut (after the YA novel The Exo Project) delivers a smart critique of modern life. Mail room temp Jacob Elliot gets lost on his first day at Delphi Enterprises. He has no idea what the company does, and overhears cryptic conversations from higher-ups (“We’ve got a scope-creep issue on the variable data extraction project and I need to force a decision,” one says). There’s a big meeting with Delphi’s founder, but temps aren’t allowed. During the meeting, a strange yellow gas suffuses the room and turns people into “rage monsters,” who all kill each other or themselves. The only survivors are Delphi’s 350 temps, all of whom are trapped inside the sealed building. Among them are Swati Sidana, who lumps Jacob in with her ex-boyfriend from college as "angry white boys" but gives Jacob points for “seem[ing] gentler, less sure of himself"; and Morgan, a young woman who beta-tested video games for Delphi and offers clues as to what the company is up to. But by the time the group finds answers in the company’s computers, it might be too late to save themselves. DeYoung cleverly deconstructs academia, video game culture, and capitalism from the perspectives of the temps. The author has a lot to say, and has crafted a fine vehicle for doing so. (Mar.)

Correction: An earlier version of this review misidentified the name of one character and the race of another character, and has been updated for clarity.