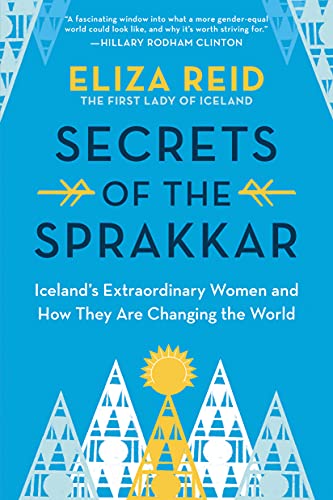 Secrets of the Sprakkar: One Small Island Nation, the Women Who Live There, and How They Are Changing the World

Reid, a Canadian who is married to the president of Iceland, combines memoir, feminist history, and travelogue in this immersive look at what makes her adopted home “the planet’s finest country for women.” Sprakkar, in the title, refers to an ancient Icelandic term for “extraordinary or outstanding women,” among them former president Vigdís Finnbogadóttir, the “world’s first democratically elected female head of state” in 1980, and Jamaican immigrant Claudia Ashanie Wilson, who in 2016 became the first foreign-born woman to pass the bar exam and qualify as a practicing attorney in Iceland. Reid also recalls meeting her future husband, historian Gudni Jóhannesson, while studying at Oxford in 1998, and recounts his meteoric rise to the presidency after the 2016 “Panama Papers” scandal implicated the country’s prime minister and cabinet members. Throughout, Reid reflects on Iceland’s history, generous parental leave policy, and strengths as a nation of less than 370,000 people (“change is easier to demand, to implement, and to measure”), while offering an intimate look at her career and life as a mother of four. Laced with frank discussions of domestic abuse, intersectionality, and other complex issues, this is a winning portrait of a country at the forefront of the fight for gender equality. Agent: Samantha Haywood, Transatlantic Literary. (Feb.)
close
Details