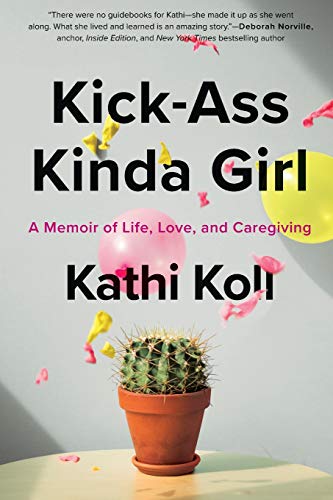 Kick-Ass Kinda Girl: A Memoir of Life, Love and Caregiving

In this touching memoir, Koll tells of her life as caregiver. Growing up in 1960s Los Angeles, she had play dates with Lucille Ball’s daughter, Lucie Arnaz, and rubbed elbows with other children of Hollywood stars. But her life changed in her teens when her mother was diagnosed with terminal cancer; at the same time, her alcoholic father frequented bars, and her mother would send Koll to retrieve him. At age 18, she married her boyfriend and got pregnant, and within a few years her father and brother died. Koll’s narrative becomes breezy when she describes, in her 40s and divorced, meeting Don Koll, a real estate mogul who took her to parties at the White House, where she met the Clintons in the 1990s. Then Don had a stroke that “locked him in.” She writes of her struggles: “If I lie in bed too long, my thoughts get the better of me, and the shadow of a sad cloud can freeze me from moving forward.” For six years Koll was his caregiver until he died in 2011. Since then, Koll has put to use the knowledge she acquired as a caretaker, becoming a public speaker and starting a foundation that helps caregivers balance their own lives. Koll’s compassionately told stories inspire and uplift. [em](BookLife) [/em]

Correction: An earlier version of this review incorrectly stated the author was pregnant before getting married at age 18.