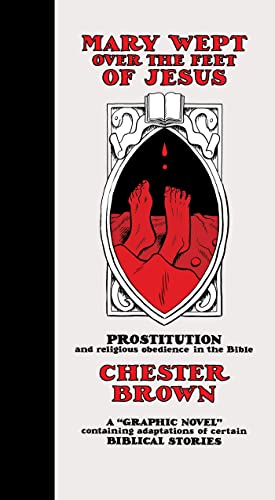 Mary Wept Over the Feet of Jesus

Reviewed by A. David Lewis

On one level, Brown’s new graphic novel is a stunning piece of exegesis. His 2011 graphic memoir, Paying for It, nakedly recounted his years of hiring sex workers and his changing attitude toward prostitution—evolving from a nervous john to a thoughtful connoisseur and advocate of the often-reviled oldest profession. Following his previous examination of the financial, social, familial, and medical objections to sanctioned prostitution, the new book delivers more than a well-researched argument, imaginatively reconstructed from Scripture, against a Judeo-Christian condemnation of sex work: rather, it’s a full-fisted counterpunch right to the biblical “souler” plexus.

Brown’s thesis is that the Bible endorses prostitution, but does so in a coded manner. By reverting to what he believes is the uncensored version of Jesus’s parables—the Aramaic version of Matthew’s Gospel—and the “sexual initiative” shown by the women in the Old Testament treatments of Tamar, Rahab, and Ruth, he aims to overturn a sacred attitude. Not only was the “virginal” Mary, Jesus’s mother, herself a prostitute, Brown contends, but Jesus himself had no objection to her work, unlike James or later Paul. Therefore, neither should modern-day Christians.

Much as with Paying for It and Louis Riel, Brown keeps the art minimal, using the pace of his panels rather than facial expressions or body language to communicate tone, suspense, or emotion. A casual reader might flip through the pages and consider them cartoony were it not for women’s exposed breasts, unobscured copulating, and an image of God as not much more than a nude giant. This overall dichotomy between deadpan cartooning and wildly violent, sexual episodes is a hallmark of Brown’s work: staying graphically essential in order to have the reader confront matter as viscerally as possible. The art is kept clear and simple, the vignettes short and direct, in order to maintain Brown’s message: prostitution is not wrong, and if the Bible were read/depicted correctly (i.e. as Brown—and apparently Matthew the disciple—intend), it would confirm that. Extensive notes, citations, and explanations for the spartan scenes fill the book’s last 100 pages, which promises to keep scholars and religionists engaged and in debate for a long time. Given the amount of effort expended, it’s an impressive, worthwhile, and even brave text.

On another level, however, the issue isn’t so much the message but the product. Brown’s approach, though logical, academic and detached, still smacks of a strange naïveté. If one reads the afterword and then delves into his notes, the rationale for his seemingly shocking interpretations are explained. But only the most devoted—or repulsed—are likely to read that additional material. The majority will wield this book as a loud, blunt instrument either for the gleeful exploitation of prostitutes or for the hellfire condemnation of whoring, as Brown feels was done with Matthew’s work, one of the canonical, synoptic Gospels. Mary Wept is a politely inflammatory treatise, but it will likely be targeted more often than it’s read. (April)

A. David Lewis has a doctorate in religious studies and is the author of the Eisner-nominated American Comic Books, Literary Theory, and Religion: The Superhero Afterlife.