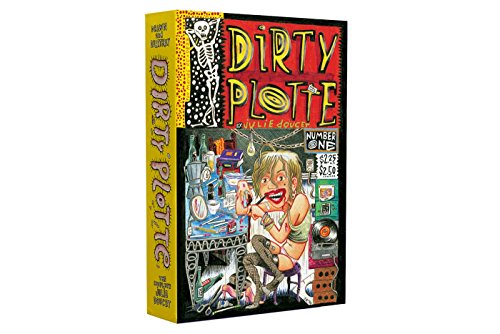 Doucet’s influential indie comic, originally distributed as a photocopied zine, receives a high-end presentation in this lavish boxed set. The French Canadian artist puts her id on paper, drawing surreal, fearless autobiography, dreams, and the grossest thoughts that creep into her head. As the series develops, she refines her wild DIY artwork, creating an animated urban landscape inhabited by characters who look like fascinatingly grotesque bobble-head dolls. Readers follow Doucet’s cartoon alter ego’s life in New York, her mad fantasies of violence, gender-swapping, and out-of-control periods, as well as emergence as an artist. The later issues are dominated by her comics masterpiece, “My New York Diary,” a chronicle of everyday life during which her career takes off, her relationship with her live-in boyfriend disintegrates, and the New York underground art scene of the 1990s is the best and worst of times. The comics are presented complete with the original letters, columns, essays, and plugs for other comics, evoking the era’s indie cartooning community’s exchanges. A companion volume in the set, “Dirty Plotte: Everything Else,” includes minicomics and other related work as well as laudatory essays from cartoonists and critics, a 1991 Comics Journal interview—all that a hardcore devotee could want. This spectacular volume of a seminal feminist work, despite its steep price, should hold appeal beyond collectors and libraries as a show-off coffee-table gift full of ’90s nostalgia. (Oct.)
close
Details